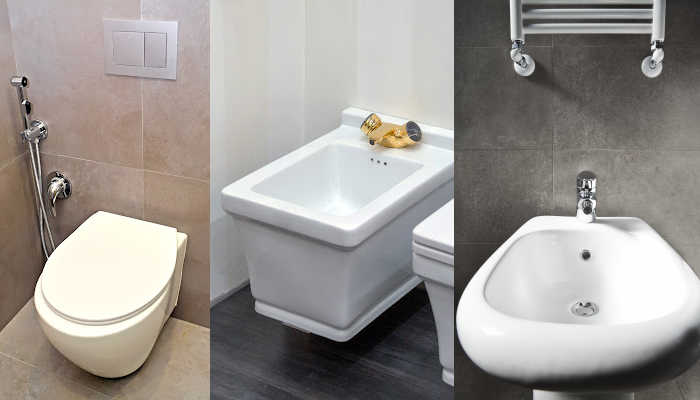 Bidets offer an efficient and convenient way to clean yourself after using the toilet.

Despite the popularity they’ve gathered around the world, they’re still remarkably unfamiliar in the USA.

As a result, detailed information on bidets is relatively uncommon and myths and misconceptions abound.

Because of this, I have written this detailed guide on the types of bidets that are available so you can find the right option for you.

The different types of bidets include:

What Is a Bidet?

A bidet (pronounced “bee-day”) is a device that is used to clean yourself after using the toilet.

Think of a bidet as like a quick shower for your butt.

Bidets are often considered more hygienic than only using toilet paper and are standard in many European and Asian homes.

The Origin of the Bidet

The word “bidet” comes from a French word that means “pony” – because you have to sit on the bidet as you would a pony.

Bidets were originally meant for aristocrats who wanted a better way to clean their genitalia.

Over time they became more popular and accessible, and people in the lower classes of society started installing these devices in their bathrooms.

Seen as a necessity for cleanliness, bidets became essential throughout France and many other countries.

In French brothels, tourists would visit and see what they thought were odd washbasins next to the toilet.

This caused great misconceptions, and bidets were unfortunately seen as symbols of prostitution or sin.

This was the reason for their initial infamous reputation in the United States.

Which Countries are Bidets Most Popular?

Naturally, France and neighboring countries have considered bidets as a part of life for centuries.

You shouldn’t be surprised if you see one in a hotel or restaurant. It’s nothing fancy, just the norm.

This includes the Middle East, South America and parts of South-East Asia.

Why Aren’t Bidets Popular in the USA?

Unless you purchase a bidet seat attachment, most bidets must be installed as a separate vessel with their own plumbing system.

American homes are not configured to accommodate this secondary plumbing system.

Not only is it expensive to do so, but many people find it unnecessary, instead favoring the use of toilet paper.

With the average US household using 409 rolls per year, it’s easy to see how ingrained this method of personal hygiene is in the culture of the United States.

How Much Should You Expect to Pay for a Bidet?

As stated earlier, bidets were historically reserved for the upper-class of society.

That’s no longer the case.

With modern technology, you can now install bidets without spending an arm and a leg.

Prices range from $25 for a simple handheld sprayer to several thousand dollars for a high-end bidet like the Toto S550E washlet.

What Are the Advantages of Using a Bidet?

There are many advantages to using a bidet.

The different types of bidets on the market have ensured such bathroom appliances are accessible.

As a result, most people can experience the numerous benefits bidets offer.

Better for the Environment

The average of 409 rolls per household annually translates to 34 million rolls per day – just in the US. This is an alarming figure.

Toilet paper, like most paper, is manufactured from trees.

Consequently, 270,000 trees are used each day for toilet paper, or 15 million per year.

In light of the environmental crisis we’re in, finding sustainable means of carrying out daily tasks is essential.

Small changes in daily routine can stimulate a huge difference in our environment.

The primary intention of bidets was to improve personal hygiene.

It’s the equivalent of only rubbing your hands with a drying towel instead of washing them.

You’ll always feel much cleaner after running your hands through water, and the same goes for your butt.

Before you start wondering where bidet water comes from and worrying that bidets use the water found in the toilet – don’t worry, it’s regular tap water.

Having a bidet with a dryer function will remove the need for toilet paper, which is a big cost-saver, especially if you have a large household.

How Does a Bidet Work?

Because there are different types of bidets, most function differently from one another, but they do share common similarities which we’ll discuss.

Basic Functions of a Bidet

A bidet essentially sprays water to clean your butt.

Just like a shower, you can adjust the temperature – yes, it’s connected to a geyser – and you can also adjust the water speed.

Some models, like the Smart Bidet SB1000, will offer posterior and frontal wash functions.

These features are for your comfort, and preferences will differ from one person to another.

After using a bidet, you can dry your buttocks in one of three ways. These options are dependent on the type of bidet you use.

The first method, and perhaps the best, is a drying function that’s built in the bidet.

Similar to a hand dryer, it’s convenient and eliminates the need for bidet towels or toilet paper, which are the second and third methods.

Employing drying towels is the oldest method of drying the buttocks after using a bidet.

If you’ll be using this method, ensure you have several drying towels available each day, and regularly wash them.

Toilet paper is still used by some bidet owners.

Although I mentioned how bad the uncontrolled use of toilet paper is for the environment, you’ll be using remarkably less of it if it’s only used for drying and not cleaning your butt.

If you use a standalone bidet, make sure you don’t use it as a toilet.

After using toilet paper, don’t dump the tissue in the bidet and think it will be flushed away.

You can damage the water system by doing so, so dispose of the paper in your actual toilet.

Here’s a list the different bidet types, including design features, advantages, and disadvantages.

Launched in 1980, washlet bidets have undoubtedly become the most popular alternative to standalone bidets.

They feature groundbreaking technology and are optimized to offer the best comfort and convenience.

What makes their design so revolutionary is that they’re essentially toilet seats with a bidet function.

They contain a hidden jet that’s easily controlled by a switch.

Once you need to use the bidet, the water jet comes out of its compartment and cleans your butt.

The jet positioning ensures that it never comes into contact with feces or urine and will remain clean.

In addition to cleaning your butt, the water jet sprays a mist on the entire surface of the toilet bowl.

This is to ensure your toilet remains clean, and there’s little chance of bacteria sticking to the walls of your toilet.

The hard silicone alloy of this water jet is dirt resistant, solidifying the washlet system as a convenient bidet variant.

Cool features that are included in such bidets, depending on the brand you get, are dryers and UV light bacteria protection.

The drying function performs just like a water jet: it comes from a hidden compartment and blows hot air.

These bidets are easy to install on your existing toilet and are designed to be DIY.

You should consult your retailer or plumber to check if your toilet is configured to accommodate this device.

The original type of bidet is the standalone bidet.

Modern types feature great technology, and they’re likely to have a dryer included.

The controls are mounted on a wall, and you might enjoy the experience of having a separate place to dry your butt.

But some people don’t like the hassle of having to stand up and then squat to dry their butts, hence the popularity of washlet bidets.

These bidets are definitely the hardest and most expensive to install.

Their price may vary depending on the material used.

The ones that come in the commonly used ceramic will obviously be cheaper than silver- or gold-coated bidets.

In addition, you may have to buy the accompanying toilet for visual symmetry.

Another option is to buy the cheaper toilet seats with a water jet – and possibly a dryer – and controls connected to them.

Or, you could buy the more expensive version, which is an entire toilet with a bidet system built in.

Compared to the seats, these combo toilets look more stylish and have improved functionality.

You’ll find a wider array of features, such as heated seats and many water settings, and the controls work more seamlessly.

Accessibility and convenience are two of the things modern technology has brought us.

These attributes are what make bidet seat attachments so popular.

The bidet system attaches to the seat of your existing toilet seat, but they’re often quite basic, so you won’t get all the bells and whistles, like adjustable water temperature and pressure.

Instead of painstakingly searching for a way to configure your plumbing to suit a bidet system, you can cheaply purchase a bidet seat attachment.

The installation is effortless – most attachments don’t need a professional plumber – and the ergonomic design ensures anybody can use it.

If you aren’t sure if a bidet system is right for you, you can start with an entry-level version of this type.

As you become more acquainted with using bidets, you may choose to upgrade and perhaps buy the more advanced products.

These are also remarkably cheap.

Hand-held bidet sprayers are like a small shower head that you can use to wash your butt.

Most are placed on the right-hand side of the toilet – within arm’s reach – and come in a variety of materials and colors.

An added benefit to this bidet system is that it can be used as a hose and help clean other parts of your bathroom.

You can clean the floor, sink, and toilet using this bidet as a hose.

For those of us who have become so accustomed to using a bidet that they’re uncomfortable simply using toilet paper alone, there’s now a portable version of the bidet.

The travel bidet is like a plastic spray can that you can keep in your car or handbag. The latest ones are electric and offer different modes and temperatures.

I recommend people get this type of travel bidet in addition to the one in their toilet.

It’s also handy for mothers who want to clean their baby after a diaper change.

Which Bidet Is Right for You?

From the types discussed above, the following is a summary of which bidet is best suited to which sort of person.

Once you know about the benefits of a bidet and the different types of bidets on offer, you’ll no doubt be tempted to try one out in your home.

From standalone bidets to seat attachments, there’s something out there for everyone.

Resources related to “Types of Bidet – Which One Is Right For You?”